Under the 'File' menu there is a 'Split' function. I would like to see a 'Join' function to join files that have been split. This comes in handy when you download from newsgroups and such for split files.

I know there are several freeware utilities to join files out there on the web but adding this feature in FreeCommander would make makes a nice complement to the Split function.

I would also like to have the "join" function in FC. Or any possibility how to do that with some 3rd party tool (as it is made in the case of comparing of files). Thanks
Top

Same here. I hope it will be added eventually, especially since it shouldnt be very hard to implement, being just a batch copy process?. Anyway, having the ability to join selected files with a key shortcut would be great.
Top

Yes. It would be very useful also to me
Top

I have developed a small console utility which accepts the parameters passed by FreeCommander (file names separated by a space) and creates a new file (named ".joined") which is the concatenation of selected files.
You can download it (C source code and Win32 binary, only 6KB) from
http://digilander.libero.it/kat888/concat.zip
I have defined it as a Favorite Tool with these parameters and it works fine for me. 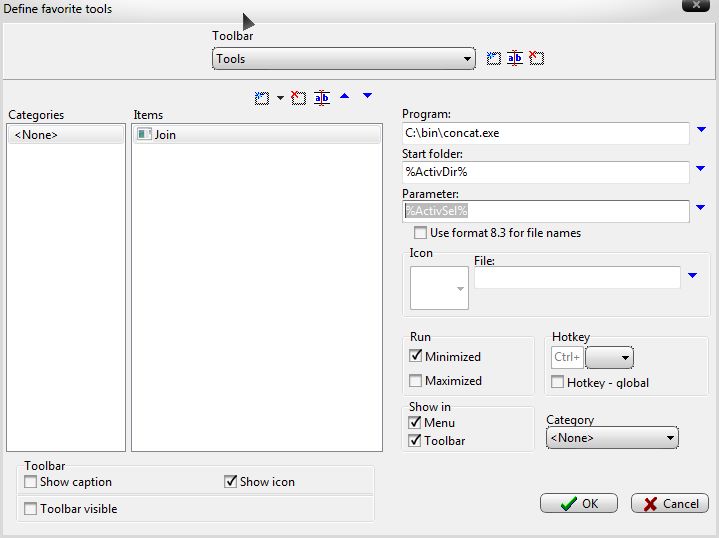 When you Split any file FC make *.bat file to merge parts.

Content of BAT-file is: where Split_.001 and Split_.002 are parts. And Split.zip is original file. You should only run .bat file.
Top

I know I ca join files using a .bat script, but there is no way to make an automatic join from within FC, because it does not put the "+" between the names of selected files.
Top

kat888 wrote:it does not put the "+" between the names of selected files.

ok. FC generates the .bat file after splitting. But it lacks a way to join files which were splitted in other ways or which simply have to be concatenated. That's why i wrote my tool.
Top

I've been using a freeware program called File Joiner v1.0 for years. It adds a right-click menu option that works perfectly in FreeCommander. You highlight the files you want to join and you have the option to "Join Here" in the same folder or "Join in..." and choose a different folder.

Unfortunately I can't find the author's site any longer, but I've uploaded it to MediaFire:

It tests clean at VirusTotal.com:

kat888 wrote:I have developed a small console utility which accepts the parameters passed by FreeCommander (file names separated by a space) and creates a new file (named ".joined") which is the concatenation of selected files.
...
I have defined it as a Favorite Tool with these parameters and it works fine for me.

Works fine for me too. Thanks kat888.

I couldn't find the filejoiner program that Wasabi referred to.
Top
Locked
11 posts • Page 1 of 1

Users browsing this forum: No registered users and 10 guests